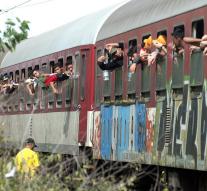 brussels - The international community Wednesday at a conference in Brussels on Somali refugees 94 million in assistance. The cost of a broad two -year action plan for Somalia that was discussed amounts incidentally over 445 million euros.

The European Union accounted for 60 million euros in support for Somali refugees in Kenya and Somalia itself. Of this, 50 million intended for the reintegration of refugees and displaced persons in Somalia.

The money is primarily spent on basic services, which should ensure that Somalis returning voluntarily from Europe, Kenya, Yemen. Also pledged to create training and job opportunities for 10 000 Somalis who return to their country.

10 million will go to the care of Somalis in northern Kenya. The conference announced plans to stabilize Somalia and to eliminate the causes of migration path. For the latter, the European Commission called recently an Africa fund in life.

Roughly one in five of the more than 10 million Somalis beaten fleeing the civil war in the country. The EU is the biggest donor in Somalia, where it has since 2008 spent more than 1.2 billion.