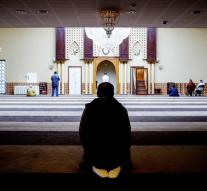 peterborough - Muslims in Peterborough, a town in the Canadian province of Ontario, Friday pray in a synagogue in the city. The Canadian broadcaster CBC reported that the Beth Israel Synagogue, a refuge for Muslims of the Masjid al- Salaam Mosque, which was founded November 14 fire. The police assumes that this was a ' hate crime ' (hate crime) directed against Muslims. The damage amounts to at least € 56,000.

The president of the synagogue, Larry Gilman, has immediately after the fire offered to the Jewish prayer house open up to the fire by ' homeless ' Muslims. Members of an Islamic society have accepted the offer. According Kenzy Abdella of that association the Jewish and Islamic religions have many similarities and a synagogue finally a house of God.