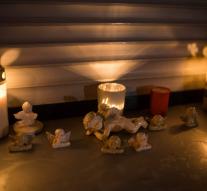 wallenfels - The mother of the eight dead babies were found in a German home, was arrested. The 45- year-old woman was found Friday night in a guesthouse. The police and the judiciary published in Bavaria.

Local residents had Thursday night the corpses found in the old woman's house in the locality Wallenfels in northern Bavaria. She then called the police. The dead babies were taken away for further examination. That should include show how long the infants were dead and how they died. The results of the section is expected early next week.