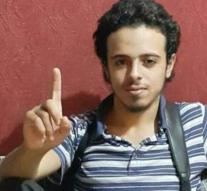 brussels - French police have identified a perpetrator of the attacks in Paris. Besides the fugitive Belgian Salah Abdeslam (26), which is seen as the mastermind behind the deadly wave of terror is about the 20-year-old Bilal Hadfi, another Belgian. Hadfi comes from Neder-over- Heembeek, a Brussels borough. Until recently, Western seemingly normal boy, who radicalized fully in less than a year.

Hadfi blew himself up Friday at the Stade de France at a time that the national football team of France played a friendly match against Germany.

Until the spring of 2014 Gaddafi was still in little more interested than football, but after that radicalism had rapidly touches him, it seems. Last July he set according to Het Laatste Nieuws a call on Facebook to carry out attacks in the West. " The brothers who reside in the lands of the infidels. Those dogs attacking our citizens everywhere. Turn into their community of pigs so that they feel even in their dreams no longer safe. "

A third name of an offender who shows up is that of Brahim Abdeslam. He committed a suicide attack on the Boulevard Voltaire. The 31-year-old Brahim Abdeslam is the older brother of the fugitive Salah Abdelsam.