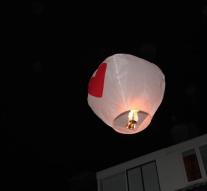 This was reported by RTL Nieuws Friday. The municipalities are afraid of fire or damage to nature. In some municipalities the plates of desire balloons anyway forbidden because there is an airport nearby.