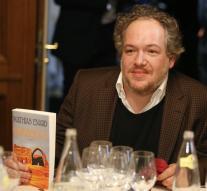 - Mathias Enard with his novel Boussole (Compass) won the Prix Goncourt, the most important literary prize in France. Enard (1972) received the award Tuesday awarded in Paris. The Prix Goncourt is a symbolic sum of 10 euros. More important are the honor and the effect on sales.

In Boussole Enard tells the story of the terminal Franz Ritter, who reminisces about his experiences in the Middle East. Like the author himself, the protagonist traveled through countries like Syria, Lebanon and Turkey. Enards fascination for this part of the world is reflected in his entire oeuvre. Boussole is his tenth book. The novels Crooks Street "Tell them about battles, kings and elephants were translated into Dutch.

The three other finalists for the Prix Goncourt were Hédi Kaddour, Tobie Nathan and Nathalie Azoulai.