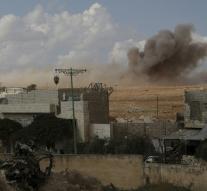 - Syrian military forces in the northwest of the country began a major attack on jihadists and other rebels. The Russian Air Force supports the offensive from the air.

The offensive is in a valley of the river Orontes, about 200 kilometers north of the capital Damascus. The area northwest of the city of Hama called the plain of al- Ghab. The commander of the Syrian armed forces said Thursday on television that " areas and cities that have suffered terrorist will be freed" .In May and June, rebels marched on to the plain of al- Ghab. They thus showed how exhausted were Assad's troops. And since they threaten the northwestern coast and connecting the capital to the coast. The coastal region is not only home to the Assad family but also houses the Russian military bases .