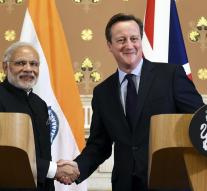 london - Great Britain and India want to " an ambitious modern partnership ". This said British Prime Minister David Cameron Thursday when receiving his Indian counterpart Narendra Modi. The two countries close during Modi's visit to an estimated EUR 12 billion in contracts, especially with the revival of nuclear energy and technical research.

The first six deals have already been signed by the British Trade Minister Francis Maude. The first agreement was on Thursday an additional investment in India by Vodafone worth the equivalent of 1.4 billion euros.

Modi 's Friday lunch with Queen Elizabeth II. She is the daughter of the last British king- emperor of India, George VI (1895-1952). Elizabeth herself was until 1956 queen of India 's neighbor and rival Pakistan. Many people from former British India have emigrated to the British Isles. Modri ​​talks Friday about 60 000 Britons of Indian origin to at Wembley Stadium.

Numerous Britons with Indian roots have criticized the extensive tribute and the fanfare that Modi befalls. They argue that the 65-year-old politician leads a Hindu extremist policy. Last weekend, suffered his Hindu nationalist BJP party a crushing electoral defeat in the state of Bihar. At the residence of Cameron demonstrated Thursday hundreds of people against the visit of Modi.