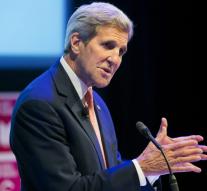 - US Secretary of State John Kerry and his Russian counterpart Sergey Lavrov will meet Friday in Vienna to discuss possible solutions to the Syria crisis. After Kerry came Friday the Russian Foreign Minister in the luxury Imperial Hotel on. The civil war in Syria is a major cause of the current refugee crisis.

Following a bilateral meeting, there are talks scheduled with the foreign ministers of Turkey and Saudi Arabia, followed by a meeting of the so-called quartet of the UN, EU, USA and Russia. Among others, EU foreign policy chief Federica Mogherini is expected.