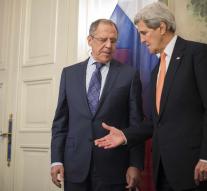 - Sergey Lavrov and John Kerry on Thursday by telephone discussed the situation in Syria. The foreign ministers of Russia and the United States discussed the coordination of the attacks on Islamic State, informed the Ministry of Foreign Affairs in Moscow.

Came the need to prevent incidents over the Syrian airspace discussed.

Both countries conduct independently flights over the country of President al- Assad uit.Volgens the US State Department during maintenance no major decisions "at a tactical level" taken .