Home / World / King Winter is the world lost the plot 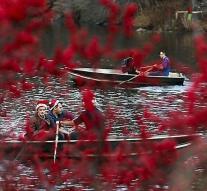 amsterdam - Northwest England struggling for the second time in a month's time with major flooding. Elsewhere in the world it is not a standard in December again.


For the first time in history, the researchers gave back twice yesterday code red off, which only happens when 'life-threatening circumstances. On the whole northern hemisphere seems to be king Winter upset. As villains temperatures in the eastern US at twenty degrees, and are the trees in Central Park already in blossom. South of the equator maintains El Niño house. Floods in Paraguay, Argentina, Brazil and Uruguay have already driven 150 000 people from their homes.
Who these days has not looked at the calendar or in the windows of stores, would swear that it is spring. The many places abnormally warm Christmas of 2015 was the culmination of a year that was rife with extreme weather.
Often the warm December weather had fairly harmless consequences, such as the US east coast, where the high temperatures (today in New York: 18 ° C) to invite more barbecue than gourmet. Temperature records are at the entire US east coast pulverized, and it was on Christmas Day hardly colder than on Independence Day (July 4). 'Sometimes the best global warming
awesome, 'said a New Yorker in T-shirt and shorts finishes a race lap.
Alps
The lack of snow in the Alps falls into the category of luxury problems. The flakes that fell in November as well as melted. Skiers pounce on the remaining narrow strip of snow. In Paris (14 ° C) and Prague (11 ° C) the sun lures people to the terraces.
Britain
Of an entirely different order is the storm that affects Britain. Deployment of the Army on Christmas Day could not prevent in the north of England and parts of Scotland streets were flooded. Weather scholars on the 'Met Office' gave yesterday on two occasions off code red, indicating that the floods are very dangerous. In just one day was a normal amount of rainfall throughout December. That northern England earlier this month already was under water, makes the rain that now falls nowhere to go can. Expected rains also after the weekend still brisk.
America
Where New York is celebrating Christmas with short sleeves, in other parts of the US began the tornado season. Cyclones roar normally from May until late November at the latest by states like Alabama, but this year the Christmas tornado phenomenon made its appearance. When storms fell elsewhere in the southern US for seventeen deaths. In California, 600 firefighters trying to stop a forest fire that already has consumed 500 hectares of land. The
Golden State is struggling for months with drought. The fire spreads even faster because of the strong wind.
Australia
In Australia it is summer, and so the season of forest fires. South of Melbourne are 116 houses have become a prey to the flames. Tomorrow and the day after it is cooler and there would also drop some precipitation. However, the local authorities take into account that the area until the end of February stage remains of fires.
South America
Also shares South America in the 'Christmas of water and fire. ' El Niño, which it sends back worldwide in the war, has caused floods in Paraguay, Uruguay, Argentina and Brazil. Paraguay River in the capital Asuncion is about to burst its banks, elsewhere in the region are already 150 000 people beaten on the run.
NEW