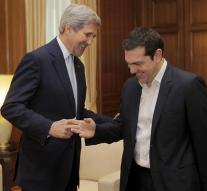 athens - It is possible that rebels together with the Syrian government of President Bashar al-Assad against Islamic State fight before Assad relinquishes power. This said US Secretary of State, John Kerry, Friday on a visit to Athens.

It will be difficult to convince the moderate rebels Assad eventually actually cleans up the field. Western powers including the US, France and Turkey have evolved over four years of protracted civil war in Syria held the view that, whatever happens, Assad must go first.

But since jihadists dominate the fight against Assad and Russia, Assad's regime by military force to collapse guards, the West is more reticent. Assad and the rebels who are not jihadists would temporarily in a sort of unholy alliance can work together, suggested Kerry.