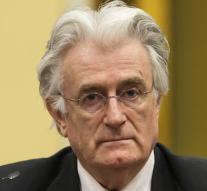 - Radovan Karadzic has sent a letter to Secretary-General Ban Ki-moon of the United Nations complained about the health situation of the detainees at the UN tribunal in The Hague. The number of deaths and serious illnesses is remarkably high.

The seventy -year-old Serb wants Ban Ki Moon makes an investigation because the prison authorities and the court despite his insistence to reject any responsibility for the health situation. There are in detention two people unexpectedly died and there were two suicides and eleven cases of life -threatening diseases such as cancer and leukemia . I had to give, after 63 years of perfect health, emergency surgery on my gall bladder undergo, writes the former president of the Serbian Republiek.Karadzic represents the ICTY trial for war crimes.