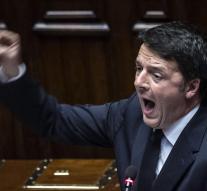 rome - Italy sends 450 soldiers to the front line with terrorist Islamic State (IS) in Iraq. Their mission is to protect workers who have to carry out repairs to a dam in Mosul, the largest in the country, said the Italian Prime Minister Matteo Renzi Wednesday.

Renzi, which earlier rejected the advances of French and Americans to get involved in the air strikes on IS in Syria, said that the contract for the hydroelectric dam is a concrete project to protect civilians. " Everyone said ' Let's bomb here,' ' let's bomb there. " I said, ' Let's do something useful ', " Renzi said in an interview with Italian radio.

The Italian company Trevi group is finalizing a contract with the Iraqi government for much needed repairs on the 3.6 kilometer long Mosuldam.