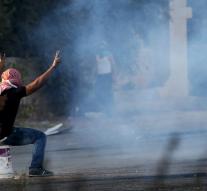 jerusalem - Israeli soldiers have arrested Tuesday Hassan Yousef, a prominent leader of the militant Palestinian movement Hamas in the West Bank. Youssef was arrested because he would have called openly for attacks on Israel.

Youssef was arrested in Ramallah.

According to the Israeli newspaper Haaretz military personnel have also arrested more than thirty other Palestinians. The long-standing tensions between Israelis and Palestinians have risen further in recent weeks.

Numerous Israelis were attacked by Palestinians. Main reason for the new wave of violence have been clashes between Jews and Palestinians at the Temple Mount in East Jerusalem.

The al- Aqsa Mosque, which stands on the hill, is a sacred place for Muslims. For Jews it is the Wailing Wall. Activision Tisch set Jews the Temple Mount, the last time go more visits.