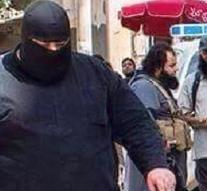 fallujah - Terror Group IS has more than 200 kilo 'Bulldozer Fallujah " a terrifying heavy bomber in the ranks.

The terrorist who usually stayed in the background until now, became known for an interview with Channel 4 with a 14-year-old boy from Syria. He claims to have been tortured and maimed by the obese terrorist, known as the "Bulldozer Fallujah". The boy, Omar says in the interview that he was captured when IS his town invaded. He was transferred to Mosul in Iraq and received the offer to join the terroristen. Toen which Omar refused, he was tortured half months. Because he refused the bulldozer was engaged. There was public regularly and they tied my hands and legs firmly. Then she put my hand on a wooden block and hacked them off him there. The terrible agony was not over for Omar. His foot was cut off. They held my hand and foot in front of my eyes so I could see them. Although the Bulldozer wears a mask to hide his identity, it is impossible to confuse him with someone else. He often walks around with guns normally placed on a jeep to fire it, writes News.com.au.