Home / World / ' IS proud to bring down Russian Airbus ' 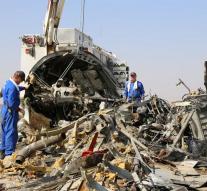 - Leaders of Islamic State in Raqqa, the capital of the IS- caliphate in Syria, and people on the peninsula Sinai would in a conversation have bragged to each other about the downing of Russian Airbus last week Saturday crashed in the Sinai. That leaves the broadcaster NBC Friday US time know based on unnamed US sources.

" They were clearly celebrating the crash ", according to a source. In the conversation was proudly talked about the downing of the plane and how it had gone, according to NBC.

US intelligence agencies intercepted a message from a group of people in Sinai affiliated with IS. They warned for " something big in the area " Before the Russian plane crashed.