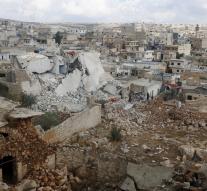 tehran - An Iranian military advisor , Gen. Hossein Hamedani , in the fight in the suburbs of the Syrian city of Aleppo killed. The Iranian news channel Press TV reported Friday . Hamedani belonged to the elite forces of the Iranian Revolutionary Guards. Who Friday announced that " commander Hamedani during the previous night by terrorists of Islamic State (IS) has been slain ."

Officially Tehran advises Assad's troops , but there have long been reports that members of the Revolutionary Guards fight alongside . Observers of the Syrian Observatory for Human Rights reported Friday that IS advancing in suburbs of Aleppo.

Shiite Iran supports Syrian President Assad against the rebels dominated by Sunni extremists . The ruling Assad clan belongs to a minority which adheres to a faith rooted in Shiite Islam.