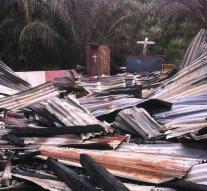 jakarta - The Indonesian government has deployed the army to put an end to the religious unrest in Aceh. Since this week churches were destroyed and certainly was a person killed.

The police said that at least twenty people have been arrested after the riots. Several hundred people have invested , according to local media churches on fire and threatened Christians. Meanwhile, the rest would be returned. " We are patrolling the area with help from Soldiers ", said a police spokesman . He did not say how many troops have been deployed. President Joko Widodo called Wednesday for an end to the violence.

He says this is " harmful to diversity " in the country. Aceh is considered the most conservative province in Indonesia . It is the only area in the country that applies the Sharia.