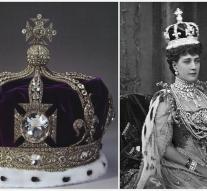 - A group of eminent Indians wants to file a lawsuit to get one of the largest diamonds in the world back in India. The diamond is worth an estimated 140 million and called Koh-i-Noor, or Mountain of Light. Small detail : the diamond is part of the British crown jewels and is partly worn by Queen Elizabeth at her coronation in 1953.

The group, calling itself Mountain of Light and consists of Bollywood stars and businessmen, has engaged lawyers to prosecute the case in London. The 105 carat diamond was stolen in India and " is one of the many artifacts that have been taken under dubious circumstances from India ", said businessman David de Souza told The Independent. The British have, according to him during the colonial period " the soul of the country destroyed ".

The last ruler of the Sikhs, Duleep Singh, gave the jewel in the nineteenth century to the then queen after the British annexed the Punjab. According to legends, the stone should be worn only by God or by women.

" The Koh-i-Noor is part of our history and culture and should be returned without question ", find movie star Bhumicka Singh.

The lawyers will base the case on the so-called Holocaust Law, which gives national authorities the opportunity to give back stolen art.

The British government has so far rejected the demand.