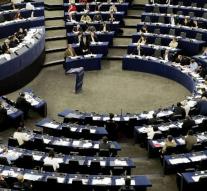 strasbourg - MEPs Wednesday a day of visiting dignitaries . Not only does the Spanish king Felipe in the plenary hall of the European Parliament in Strasbourg politicians from the 28 EU countries increasing. In the afternoon, take the French President Francois Hollande and German Chancellor Angela Merkel participate in a debate .

The two leaders are expected to talk about the challenges in the current Europa.De Spanish king will give his speech at 12.00. The meeting with Merkel and Hollande will begin at 15:00.