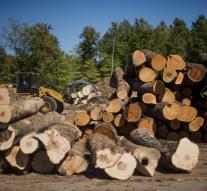 brussels - By remaining legislation in the EU Member States may still illegal timber entering Europe. Greece, Hungary, Romania and Spain have adopted in the 2010 European directive that prohibits this still not been fully transposed into their own legislation.

This enables the European Court of Auditors in a report Thursday. " The European Union must first get its own house in order and set an example by the trade in illegally harvested timber to deliver a blow. "

The results of the action plan against deforestation, the European Commission launched its twelve years later skinny in 2003, the court shall determine. And while countering illegal logging " critical " for combating climate change and the preservation of species.

The committee made ​​between 2003 and 2013 about 300 million to 35 countries. Indonesia and Ghana are making progress, but generally there been little discernible progress, conclude the accountants.