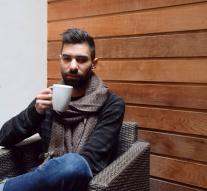 - He had prepared himself for yet another boring night shift as a receptionist of the hotel where he has a second job. But Stéphane Leibovitz (30) spent much of the night in the basement, where he together with him for strangers almost three hours blocked for one of the gunmen in Paris.

He calls himself a coward. " People are not seeing their best side when they're scared. After I seem 'd seen, I dared- once safely in the basement- at first no more upward to open the front door for guests who wanted inside. Of course I have them admitted. "

It was between half past nine and ten o'clock at night when he suddenly saw people running down the Rue du Grand Prieuré. " Drunk, I thought. " The small lobby of the charming hotel was empty, so Stéphane decided to take pulse height. He walked against the flow direction, north. " It ran more and more in my direction. A girl cried : do not go there. I felt no mischief and curiosity was too great. "

About seven pop he heard in quick succession. "Was it fireworks? This is quite often fired at demonstrations and events on Place de la Republique, just steps from the hotel. Still I did not realized it was serious. "

He walked through Jules Ferry Boulevard towards Rue de la Fontaine au Roi, swelling heard sirens and saw on the corner there are police cars. In one of them there were three agents who loaded their weapons. "I saw fear in their eyes. She hesitated on their goal to go off. Then I knew: this is very wrong. "

He swallows bought him. " A man was walking, or actually tossed my direction. He collapsed. He was hit by one of the bullets. " A second body he sees on the edge of the road, made ​​him realize that he had to turn around. Back to the hotel.

On the street, Café Bonne Biere and pizzeria Casa Nostra, five people were slain. It was the second attack that Friday was committed. A girl during the shooting was sitting on the terrace of the café, running in panic with Stéphane them. " She was totally confused and did not know where she was going. I've taken her to the hotel. Along with a dozen other strangers who were looking for a safe place. "

Stéphane turned off all the lights, and in the basement the radio was turned on. " The girl could not stop crying. I could do nothing more than give her tea and the occasional hug. We all wanted to cry. " He tells it all after his night shift. He has circles under his eyes, raises a cigarette and drinking coffee, though it does not need to stay awake. "Too much adrenaline," he says. "We all thought that Charlie Hebdo was an isolated incident. We went on with our lives. What I find alarming is that in the attack on the editor of Charlie was a kind apparent reason. These attacks were just because we 're French. This was not an attack on satire, a government or other symbol. This was a murder attempt on a carefree clubbers. "