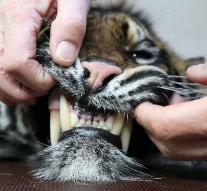 acapulco - The Mexican authorities hunt at resort Acapulco on an escaped tiger who has slain five cows so far.

The predator escaped Monday from a restaurant in the city Coyuca de Benitez, where it was apparently exhibited.

A farmer later found five dead cows presumably by the tiger are bitten to death, reports Associated Press. Then the tiger did however no traces after.