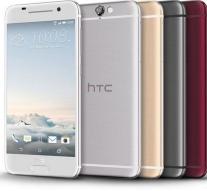 - HTC has announced the One A9 smartphone, the "little" brother of the One M9.

According to many, the new device looks very much like the iPhone 6 and 6s. The new HTC smartphone is just like Apple's brushed aluminum and the back are the antennae of a lighter colored 'rubber'. Of course, the A9 is no iPhone.

The Taiwanese smartphone runs on Android and on a number of fronts also looks slightly different. For example, the camera is in a different location on the front side and there is no fingerprint scanner, but a traditional start button.

The device contains a 5-inch screen and a Snapdragon 617 processor. The camera on the back is 13 megapixel photos and audio area A9 is equipped with the same hardware and software as the M9. That's good news for audiophiles, because HTC's are known for their good play high resolution music.

On the software front, the A9 is the first non-Nexus smartphone that runs on Android 6. 0 Marshmallow. As we have come to expect from HTC, incidentally, it is not "bare" Android version, but a variant of the HTC Sense skin over it is laid.

However, this is less noticeable than on previous phones. The One A9 will cost around 400 euros and come in November on the market.