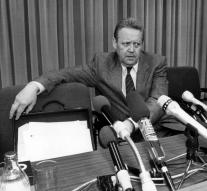 - Günter Schabowski, the spokesman of the East German Communist Party (SED) to November 9, 1989 the Berlin Wall heralded his wrong answer during a press conference, Sunday is deceased. This is his widow, Irina Schabowski, the German news agency DPA announced. Schabowski has become 86 years old.

He made history in the turbulent days during the collapse of the communist regimes in Eastern Europe. Which divided their domain with huge roadblocks from the West (Iron Curtain) to prevent the population moved to the prosperous and free West.

A reporter asked SED spokesman Schabowski when impending measures by the government of the SED (Socialist Unity Party of Germany), traveling to the west should make it easier, in effect would be. Schabowski that the package had not read well, replied by mistake : " immediately ". East Germans immediately flocked to the 'wall', where border guards are no longer held against them.