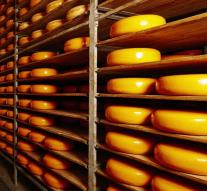 - A Polish truck driver has been sentenced to twenty years in prison in Britain. He was caught in June with the arrival of a ferry from the Netherlands in Harwich. Between his load Gouda cheese he had hidden 50 kilos of heroin, worth 6.7 million pounds, converted 9.3 million.

The British police which reported Friday. During the investigation detectives discovered that the Pole had been a few months earlier in London. He then gave a bag with 16 kilos of cocaine at a major drug dealer. Who got there later seven years in jail.