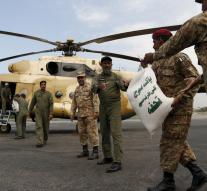 - Rescuers are struggling to reach the Monday, an earthquake struck the Hindu Kush region. The area on the border between Pakistan and Afghanistan is a rugged and mountainous terrain, where probably many people may be trapped. The scarce roads often become impassable. Pakistan puts helicopters.

The number of dead on both sides of the border was Tuesday morning in total estimated at more than three hundred. Pakistan counted 230 victims and the Afghans 84. Since the authorities still have little insight into the situation in remote areas, those numbers could still rise.