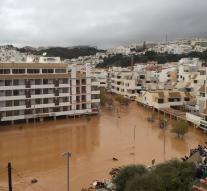 - The Portuguese Algarve is Sunday hit by storms. Places along the coast thereby experiencing heavy flooding.

Thus, the authorities evacuated the tourist site famous Albufeira parts of the town. This happened especially in the center, the most affected part of Albufeira, where people are trapped by the water.

Hands in her Jaap van der Veer, who is currently staying in Albufeira, can testify. He comes 20 years to the Algarve, but has never experienced anything like what he saw Sunday in Albufeira: " What we encountered there... Albufeira is situated on the Atlantic Ocean. On the beach just knocked off a part. There are cars under water. Police and firefighters standing with hands in her hair. " According to Van der Veer would certainly be one death cases. The rain began, according to Van der Veer in the night from Saturday to Sunday and lasted until mid-afternoon. He does not think the problems are quickly resolved.