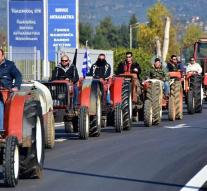 athens - The protests in Greece against the intention of the government to cut back 15 percent on pensions and to introduce new taxes, expand. On Thursday morning for the second day in a row, people took to the streets and has stopped work in different sectors.

For the second consecutive day not sail example springs to and from Piraeus, leaving many islands are inaccessible. Many Greek journalists work Thursday either, inter alia, the news does not continue through the radio and the TV.

Also, farmers have taken action. With tractors, they have blocked major roads and border crossings. Lawyers and notaries are not working from 24 pm Thursday. February 4 for his extensive strikes announced.