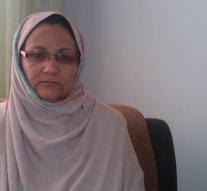 kabul - The female governor of the Afghan province of Ghor has had several death threats from armed commanders of the army, " reports Radio Libery / Free Europe .

Sima Juenda is one of the two female governors in the conservative Islamic country.

Joyenda has been governor for four months and says she structurally ' hassled ' by male leaders from the military and other parts of the government, which they invariably ' plague guys ' names . " The only reason they are against me is because I'm a woman " Joyenda says .

" I will not admit defeat just because I am a woman, " she says aggressively to Radio Liberty . Joyenda meanwhile called on the assistance of the government in Kabul to " to put an end to the harassment. " Sunday afternoons were dozens of people in the province's streets to show their support for Joyenda.