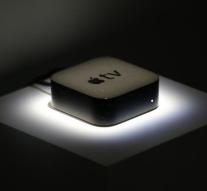 - Google and Apple have joined in the fight mixed to the broadcasting of three NFL games in the coming season. According to Reuters, the two tech companies want to broadcast football matches played in London. Last season, Yahoo had the rights to one game.

What Apple and Google the rights to, is not entirely clear, but it can be predicted. Apple will want to use it to generate unique content for the Apple TV and Google can give it a boost with YouTube. Yahoo seems this year is not interested in the rights. Perhaps that has something to do with the difficulties in which the business is located.