Home / World / German police are looking into allotments for Elias 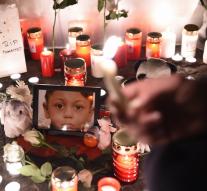 - The German police are looking into an allotment complex in Luckenwalde to the remains of the six-year Elias. The man who was arrested Thursday on suspicion of kidnapping and murder of a refugee boy in Berlin, has confessed that he Elias slain and buried in a garden.

During the hearings on the four-year-old Mohamed, whose body was found Thursday in the car of the accused, confessed the 32-year-old man that he Elias slain in July. That the prosecution confirmed Friday.

Since July Elias is missing from Potsdam- Schlaatz.

The German news agency DPA reports that both words may be perpetrated with a sexual motive.