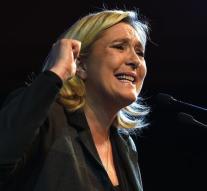 - Shortly before the elections in the French regions, it is anti-European and nationalist National Front of Marine Len Pen in a poll to head. In the first round of regional elections Sunday it would FN can rely on the support of 30 percent of voters according to a Thursday by the newspaper Le Monde published polls.

The center-right coalition of ex- president Nicolas Sarkozy would win the support of 29 percent. The coalition of left at 22 percent. In the second round on December 13 would be stronger than the center- front come out on top with 36 percent and the FN 30 percent.France has reduced the number of regions from January 1, 2016 to eighteen, including five overseas. Currently the country has 27 regions. The powers and responsibilities of the regions are very limited. The elections are seen primarily as indicator of the popularity of the government.
NEW