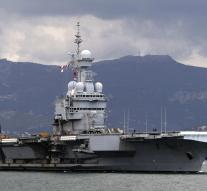 - France, the terrorist attacks on Islamic State (IS) to expand Syria, now the country is at war with the terror group. To support these attacks will France 's Charles de Gaulle aircraft carrier sent to the region. That said President Francois Hollande Monday to the French parliament in a speech following the attacks in Paris, which cost the lives of 129 people.

" In the coming weeks we deal with these attacks ", Hollande said. He stressed that the attacks were conceived in Syria, scheduled in Brussels and implemented in France. The president also announced a series of other measures to " to keep the unity of the country ". As Hollande Tuesday will convene the UN Security Council in order to adopt a resolution to combat IS.