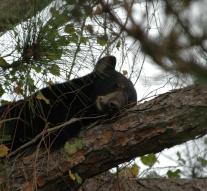 tallahassee - The first bear hunt in the state of Florida in 21 years, was such a success, that has ended after just two days. The Hunters in the Sunshine State last weekend killed 295 bears, which the state closed the hunt again.

Previously it was agreed that a maximum of 320 black bears would be shot. " We do not want another full day allow hunting and the risk that we are over the limit of 320 go ", said a spokesman for the wildlife management at the newspaper Tampa Bay Times.

There were four hunting areas where the bears were outlawed, each with its own limit. In an area in the east Saturday were diverted all 112 bears, three times more than was allowed. The limit in the center of the state of hundred was Sunday exceeded 139 black bears ended up dead in the back of the pickup trucks of the hunters.

Presumably, the total number of animals killed is rising because the hunters still even have the time to report their successes.