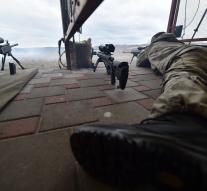 - Five Ukrainian soldiers have been in the last 24 hours in the fighting in the east of the country were killed and four others were injured. It is the highest death toll since the cease-fire for over two months ago in the area of ​​effect.

Guns have mostly been silent since early September. In recent weeks, unexpectedly, there is more violence. Both parties, government troops and separatists blame each other for the renewed violence.