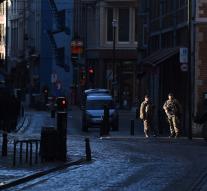 - In seven raids in Brussels and Liège, the Belgian police Monday morning, five people were arrested.

It reports the Belgian prosecutor. A spokesman says that they are heard at this time.

Agents are five houses in Brussels and two in Liège.

During a search of Sunday a sum of 26 000 euros were seized. Other items carried are still being investigated, said the prosecutor.

In total, since Sunday 21 people arrested during raids because of the terrorist threat in Belgium.

It is not yet managed to find the fugitive Salah Abdeslam. He is wanted for his involvement in the massacre in Paris. Sunday night there were rumors that he was in a BMW, who fled to Germany at high speed when he was arrested by the police. It was later revealed that the terror suspect was not in the car.