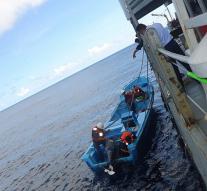 - Four fishermen Tuesday after a month at sea float rescued by the Mexican Navy. An airplane saw the little boat of the men from Colombia and Ecuador in driving weekend in the Pacific Ocean, 260 kilometers off the Mexican coast.

Due to lack of drinking water was almost four dehydrated. The fishermen left on September 24, the 2000 km to the south port city of Puerto Esmeraldas in Ecuador. However, they were off course and on October 1 they were running out of fuel. The currents drove them to the Mexican coast.