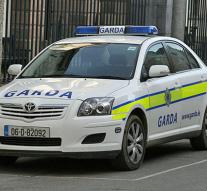 - A large fire in a trailer park in the Irish capital Dublin has an unknown number of people killed. The fire broke out early Saturday morning and is still not under control. According to the newspaper The Irish Times, the authorities can not say anything about the number of victims.

The fire is with heavy equipment plucked to camp in Carrickmines, south of the capital. There are six fire trucks and four ambulances summoned.

According to the Irish newspaper The Journal there are probably children among the dead. Two adults and two children were taken to hospital because they have inhaled smoke.