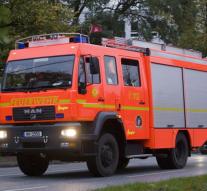 einhausen - A 19-year member of the local fire department of the German Einhausen is considered the founder of dozens of fires in and around that place. According to German media, he has more than a dozen fires known.

Einhausen in Hesse in the past year ravaged by fires. The last twelve months the fire tore forty times out. The then-unknown perpetrator was in the troubled six thousand strong population all the " fire devil " mentioned. At the last fire the teenager was finally arrested in straw bales in the night from Sunday to Monday.

No one was injured by the fires. The total damage amounted to about half a million euros.