Home / Tech / Finland gets own emojis 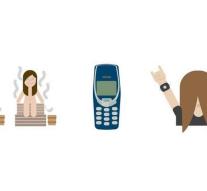 - When you think of Finland then you think of saunas, Nokia and metal music. At least that's what the Finnish Ministry of Foreign Affairs of it. ThisisFinland website comes with a special advent calendar, with each hatch a private Finnish emoji.

Finland is the first country in the world to have its own set of emoji stickers. Advent calendar appear emoji 24, the first three have now been announced. In total, however, there will be more than 30 appear which can be downloaded from December 1st.

On the same day the emoji calendar appears in thirteen different languages, including English, German, Arabic, Japanese and Turkish. A spokeswoman for the ministry stressed that although Finland emoji have an ironic twist, they had to contribute to the knowledge about the special features and the strength of the country.

" The emotion that are mostly used by young people communicating as revolutionary changes as the invention of SMS. Emoji are used to communicate visually rather than verbally, and that suits Finns, "said spokeswoman Petra Themann.