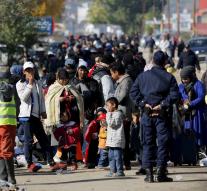 strasbourg - European Member States that refuse to accommodate asylum seekers need to feel in their wallets. Brussels must reduce their subsidies, is the European Parliament.

The European Commission should bring forward proposals for this, a majority of the parliament early Wednesday in Strasbourg. Eurogroup President Jeroen Dijsselbloem had this idea already mooted Monday after the party Law and Justice (PiS) won the Polish elections. That party really wants Poland to pick not Muslims.

" It can not be that you only enjoy the benefits of European cooperation, but are not willing to bear the burden ", finds EU parliamentarian Paul Tang (PvdA).

Hungary, the Czech Republic and Slovakia have spoken out against the mandatory distribution of refugees across the EU. These countries have billion subsidies from Brussels. Tang thinks they really have to contribute to the solution " the biggest problem facing the EU is now facing for ". Otherwise, the hand on the purse strings, according to the Labour Party parliamentarian.