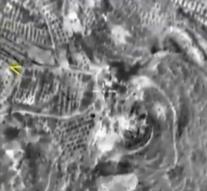 luxembourg - The attacks of the Russian Air Force on moderate opposition groups in Syria must be stopped immediately. That message gave " very worried " EU foreign ministers in Luxembourg on Monday .

Also a violation of Turkish airspace by Russian warplanes to stop, the ministers said. They fear that a solution to the conflict is moving further out of sight and radicalization strengthened.

The ministers want Russia to use less violence and aimed at a political solution. Lasting peace is not possible According to them, the current president of Syria, Bashar al-Assad.

The conflict has been over a quarter of a million lives and displaced over 7.5 million people from their homes. The ministers described it as the "greatest humanitarian disaster in the world in recent history".