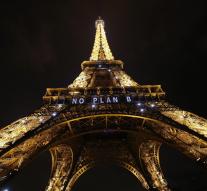 - Negotiators at the climate summit in Paris will present at 11:30 am their draft agreement for a climate treaty to the representatives of the participating countries. The French Government has announced that a draft agreement in the night from Friday to Saturday was completed. Participants should see if they agree.

The chairman of the conference, French Foreign Minister Laurent Fabius, would, if everyone agrees, later on Saturday to hold a meeting where the 196 participating countries formally accept.

This results than the first climate in which virtually all countries of the world commit to tackling climate change. This must with international efforts to prevent the global warming due to the change in the environment rises above 2 degrees.

The climate conference commenced on November 30 in the French capital. The summit would actually be completed Friday, but the agreement was extended by a day.