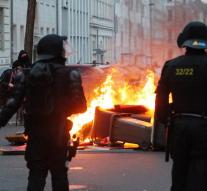 - By riots in Leipzig are Saturday nearly 70 officers injured. In the city was a demonstration of neo-Nazis. The police forces clashed with leftist counter-demonstrators who had come to the demonstration of right-wing extremists. Officers were pelted with stones, bottles and fireworks. Also belongings were burned. 23 people were arrested.

Not only do many cops were injured, the police also lost material. About fifty vehicles were damaged, four are totaled. There were about 2500 protesters on the leg, reported one of the organizers. Much more than the few hundred right-wing demonstrators.The mayor of Leipzig called the riots " shocking " and spoke of " ". street terror In the night from Saturday to Sunday, according to the police officers on the street more than usual, but it is quiet. " We are ready for anything ", a spokesman said.

The German police use water cannons against aggressive protesters