Home / World / Dead whale washed up on the Razende Bol 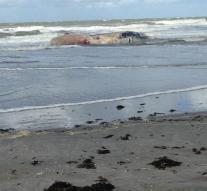 - Employees of the nature museum Ecomare have on Razende Globe, a sand bank between Texel and Den Helder, found a dead whale. That made Ecomare announced Sunday.

The nine meter-long animal was already dead time. It probably involves a female minke whale.Researchers from Utrecht University will try to determine the cause of death. They also want to know what the animal has eaten. This kind of knowledge can help to better protect this species of whales in the North Sea.Minke whales are the smallest baleinwalvissensoort who lives in the North Sea and the only vinvissensoort which normally occurs. They have a slender, streamlined body with a narrow, triangular head. They occur in all oceans and in the North Sea.There beaches more often dead minke whales on the Dutch coast. Last month, a six meter long dead minke whale in the harbor of Rotterdam find that it had been hit by a ship. In March 2013 a young specimen stranded on the coast of Nieuwpoort in Belgium. This whale had died because four plastic bags had ended up in his stomach, which had blocked the digestive system.
NEW