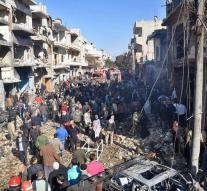 damascus - At least 28 people Sunday were killed in air raids on suburbs of the Syrian capital Damascus. Among the dead are at least two children and a school principal.

According to the Syrian Observatory for Human Rights were unrecognizable aircraft attacks. The Observatory operates from London and relies on reports from activists and witnesses.