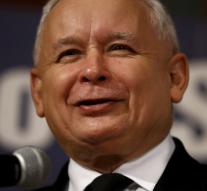 warsaw - The conservative opposition party Law and Justice (PiS) of former Prime Minister Jaroslaw Kaczynski seems to be the big winner of the parliamentary elections in Poland. In the exit poll, the party stood at 39.1 percent of the vote.

The liberal Civic Platform of the current Prime Minister Ewa Kopacz came in the poll on 23.4 percent. Civic Platform was eight years in power in Poland.

This percentage would vote PiS alone can form a cabinet. The score is good for 242 seats in the 460 member parliament.

The victory of PiS can have consequences for the European course of Poland. As the eurosceptic Kaczynski feels little to accommodate Muslims in the predominantly Catholic country. His party wants to allocate more money to support the poor and against early accession to the eurozone.