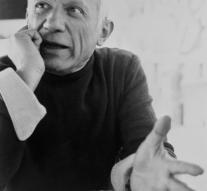 granada - Spanish police have arrested providers of pirated works of the Spanish artist Pablo Picasso (1881-1973). Over the weekend, police announced that six in Granada and Benidorm two suspects have been arrested. Five fake Picassos were seized.

They were sold for a total of 160 million euros. The providers in Granada had concocted the story there that showed the paintings from Cuba, where lived a grandparent of Picasso. The story in Benidorm was that Picasso's came from the legacy of a man in Barcelona. According to police, the arrests are in the two cities separately and is not about one gang Picasso Counterfeiters.